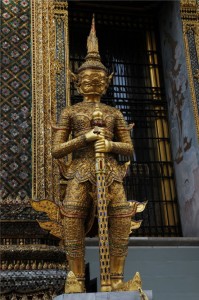 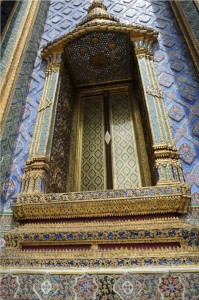 Traditional Thai massage has evolved over 2500 years and originated from the existing local practices, influences of Chinese medicine with special emphasise on acupressure techniques, some elements of yoga, as well as the ancient Indian art of healing – Ayurveda. It is assumed that the precursor and master, at its initial stage was Jivak Komar Bhaccha, who lived in India at the turn of 5th and 6th centuries. He arrived in Thailand on the wave of expansion of Buddhism. He taught and developed the art of massage, which in the following centuries was officially recognised and acknowledged as the base of Thai massage.

Over the following centuries, the techniques of massage were improved and practiced mainly at temples or Buddhist monasteries, and their transmissions to the next generations of monks was done exclusively orally. The first known documents, exactly describing positions of massage, were written down in Thailand on palm leaves in the Pali language in the 17th-thcentury.

Unfortunately, the majority of them were lost during the invasion of Burmese troops and the destruction of Ajuthaii, the then-capital of the country. In 1832 the reigning king Rama III ordered that the salvaged texts be carved on stone boards and then embedded into the wall of the Phra Chethupon Wimolmangklararam temple well known as the Pho Wat temple in Bangkok. They present 30 images of the body from the front and 30 images of the body from the rear along with pictures showing energy channels, healing points located on them, as well as descriptions which were painstakingly observed during Thai massage. 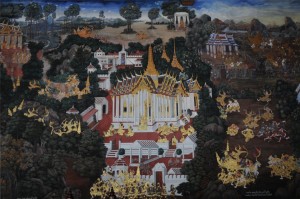 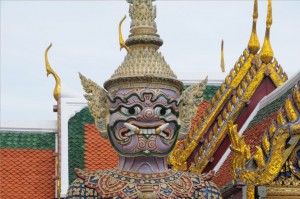 Traditional Thai massage, – in the Thai language nuad phaen boran, – means the natural – often called holistic – method of treatment with hands. Massaging consists in restoring the energy balance of the organism, disturbed as a result of illness or stress, through rhythmical and calm pressing as well as stimulation of some points located at the crossing of the energy channels (it is commonly assumed that there are 72000 SEN channels).

In the course of the traditional massage, only 10 main channels and the pressure points located on them (CHOP SEN) – situated in the vicinity of joints or nerves routes are recognised. This allows, during a correctly- performed massage of the whole body, for restoration of the energy balance of the organism, for the free flow of energy and for acceleration of the natural process of healing.

Some elements of the acupressure technique (pressing with thumbs, hands, elbows, forearms, knees and feet), stretching techniques and elements of reflexotherapy are applied during the massage.

In the course of the massage, a technique of temporary stoppage of the blood circulation is applied, through pressing against arteries. Moreover, some positions resembling positions of yoga are applied (asan) – hence sometimes it is possible to find a definition of Thai massage as yoga for the lazy.

The Buddhas teaching is the very essence of Thai massage – therefore, every performance is a physical type of sympathizing and simultaneously of kindliness it is a form of meditation during which both the person undergoing the massage and the massage therapist find themselves in the state of deep contemplation and relaxation.

According to contemporary medicine (referring to methods of treatment on the basis of scientific experiments), the traditional Thai massage has been qualified as belonging to the group of treatments or mobilization techniques, fascial techniques, as well as ones that manipulate the spine and limbs.

When performed prophylactically, it improves the physical, mental, intellectual and spiritual condition, and it enhances body’s immunity. In the case of illness, depending on its manifestations, it may constitute the main method of treatment or may be only an addition to other techniques. Practically every person may use Thai massage as a form of exercise to improve the range of movement within the joints, as well as the strength of muscles, as a form of relaxation, as a prophylactic, and to enhance the body’s immunity.

Thai massage improves blood circulation and at the same time accelerates drainage of the waste products of the metabolism:

This website uses cookies to improve your experience while you navigate through the website. Out of these, the cookies that are categorized as necessary are stored on your browser as they are essential for the working of basic functionalities of the website. We also use third-party cookies that help us analyze and understand how you use this website. These cookies will be stored in your browser only with your consent. You also have the option to opt-out of these cookies. But opting out of some of these cookies may affect your browsing experience.
Necessary Always Enabled

Any cookies that may not be particularly necessary for the website to function and is used specifically to collect user personal data via analytics, ads, other embedded contents are termed as non-necessary cookies. It is mandatory to procure user consent prior to running these cookies on your website.